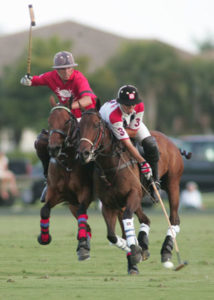 If you feel in need of some adrenalin-pumping spectating, an afternoon watching a Polo match is the best way I know. You are sitting down (well, most of the time) so theoretically the doctors will approve!

But if you have tried to watch a match on TV, it is deadly boring; you need to be there to experience the thrill of a ball being hit at full gallop right up the 300 yard long ground (three times the length of a football pitch), or hear the ‘comments’ as players try to ride each other off – perfectly legimitately.

MINT POLO IN THE PARK is coming to Hurlingham park, right in the middle of London, and to make it easier for first-time spectators, the rules have been changed slightly. You won’t have to understand why a ’sandwich’ is a no-no, or why players are allowed to purposely bump into each other (known as ‘riding off – if you want to air your knowledge). Just sit if you can – or stand up and cheer!

If you are in a wheelchair polo players are some of most friendly people around – there are always good places to sit in best position in the stands, provided you inform the organisers before to reserve a space. And you can usually drive your car right up to the side of the arena, and sit in it if you want.

Hurlingham Park is the spiritual ‘home’ of British polo, and Teams play by Hurlingham rules, because these took their name from the ground. But come World War II, the ground was dug up to grow food, and polo never returned – until now.

June 4th – 6th 2010 eight Teams from across the World are out to show Londoners how exciting a Fast, Furious and Spectator-Friendly game can be when played at full throttle.

Most of the players will be professionals, i.e. paid to play. They are very, very secretive about their earnings – let’s just say the top ones are in the same league as football players, and they go on playing until well into their forties – or fifties. They are retained by their teams for the ’season’, and somehow they have negotiated six seasons a year -which range over tournaments in Argentina, where the World’s most important tournament takes place; England (where the No. 2 tournament, Cowdray Gold Cup, takes place), then off to Dubai, Australia, USA, France, Spain, etc. depending on where they are booked to play.jack-kidd-and-kids

SOME OF THE PLAYERS

Jamie Morrison, son of the legendary Bryan Morrison, will be at Hurlingham, with a handicap of 4.

Henry Brett, (6) former England Captain has won every major tournament in the UK and many more around the world. Gaining his first England cap at the age of 17.

Kirsty Craig, one of the dynamic female players, has played for England in India and Germany. Polo is the only sport I know where women play equally alongside men. However, we just don’t have the strength to ‘ride off’, so don’t get high handicaps.

Piki Diaz Alberdi (9) is one of top players in world; this Argentinian always plays his hardest, and is expert at judging a hit to a nicety, scoring from yards out in the field.

Just remember though; should a pony and player come down, the commentator and spectators will first want to know ‘how is the pony?’, and then worry about the rider.

In between matches, you can indulge in retail therapy in the tented shopping village. Audi cars will be there, Elemis with their wonderful Spa Bus, The Silk Road and other clothes stores with cashmere and silk clothing, Peruvian silver jewellery, shoes, Aspiga and other luxury beachwear companies, suede and leather shops (wives of the Argentinian players always stand out because of their lovely bags and shoes), and other luxury goods galore. And they accept credit cards!

In the same category
Holiday: France, Germany, Italy, Switzerland – and how to travel, insurance etc.
Are airports putting cancer patients lives at risk?
Cancer in children