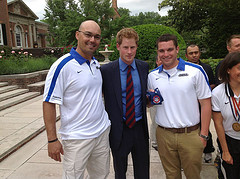 Prince comes into his own

Growing up with a Forces background, I knew that father, cousins and family got up to dreadful pranks. But when it came to fighting, they served in the Mediterranean and Russian convoys, became Bomber pilots, Army cousins served in the 10th Royal Hussars, when most were killed in Normany landings, and one helped change the parade ground into a Go Cart track, much to his Sergeant’s horror. and went on manoeuvres with bottles stuffed up his tank’s gun (found out when the General in charge singled his tank out to lead a charge).

They may have got up to all sorts of pranks (far worse than Harry’s nude scenes), but their commanding officers knew this was just letting off steam ; when push came to shove, they delivered.

Now, Prince Harry is really delivering. Let alone what he did during two tours of duty in Afghanistan (a nephew did the same and says it is no picnic), he is now getting a huge amount of invaluable media attention for the disabled. And boy, do we need it.

You would think that today, with all that is written about disabled rights, life would be easier. But you only have to go in to Peter Jones (our local John Lewis store) to see how reality is different. All chairs have been taken away, and cash tills moved. Complaining to PJ about this, answer comes back that we can always ask for chairs! And it’s only a few more yards to walk to tills ! PJ hasn’t heard of portable credit card machines. Complain, and you are told that you can request a chair – which singles us out when we have to ask one of the hard-pressed staff to stop serving and go off and get us a chair.

What could be useful

It was interesting to hear Harry acknowledge that US rehab is better than we have. Whilst Help for Heroes has done wonders with Hedley Court’s rehab., talking to physios etc. who have worked there, they admit that facilities for US troops are far better. There was TV footage of a soldier strung up in front of video footage, to teach him balance – and yes, I have seen this in Oxford, but at a private centre, not one that can be used by NHS.

But perhaps Captain Wales’s interest might persuade our rehab teams in Britain to look further. I was lucky enough to be treated for polio whilst my father was in the Navy, in the days when Forces’ dependants got top priority ; but I had to work out for myself what Dr. Ludwig Guttman was doing in Stoke Mandeville, and then adapt it for myself. Having been told I would never walk again, I was darned if I was going to believe the medics – so learnt to be an awkward cuss ! But came across the ‘what’s best for majority – not for me as an individual’.

And it is treating disabled as individuals that is so difficult, when we need specialised attention. This apparently is how system works in USA, and hopefully Harry’s interest might highlight that each of us needs individual care tailored for us. Give us this, and we will surprise you! As I did when I walked out of hospital past doctors who had spent a long time preparing me for life in bed – but not giving me tailored exercise programmes, which I managed to work out for myself, then got Bob, my favourite Porter, to wheel me into hydrotherapy pool and leave me there all afternoon – when no-one knew what I got up to !

So when today doctors say that those who make a fuss recover better – you’ve got to believe this is so. Remember, it’s YOUR body – so go ahead and DEMAND what you think you need. I reckon those troops we see struggling across the Antarctic, or cycling to Paris, or just getting back on their (prosthetic feet) don’t stop to listen to the NHS which says there is no money for treatment. So go out there and get going – and to H–L with what anyone says !